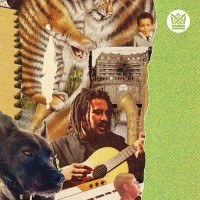 It’s bang up-to-date ‘Bristol Sound’-influenced soul on new single, King, from the inspired pairing of NYC instrumental cinematic soul outfit El Michels Affair with the UK’s very own Liam Bailey on vocals. The track is lifted from the EMA meets Liam Bailey LP Ekundayo Inversions and only just precedes the release of that later this week. Bailey’s voice appears  almost immediately over a bit of Fender Rhodes and before you can say, ‘wow – this seems to be a song about the trials and tribulations of making it in the music business’ in come big stompy drums. As we know though, the music business is full of ups and downs and the music reflects this with a dropout of bass and drums followed by a return later on.  While it might comment on the music business rollercoaster though, this one rules your ears all the way, indeed, as Bailey sings, “Could say he’s found his voice again/ Could even say he’s found his breath/ He wrote the words ‘fuck it’ under his issues/ And eventually the bullshit just left.” Damn straight – no bullshit here.
(Out now on Big Crown Records)