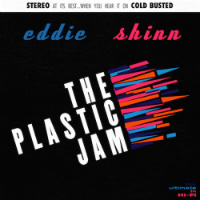 More ‘downtempo’ breakbeat action from the Cold Busted label that follows in the footsteps of drops from My Neighbour Is, Mister T and Funky Destination in actually being quite funky and lively. And as my first piece of evidence your honour, I’d like to submit the upbeat, 108 bpm instrumental box of party breaks happiness entitled – er – Box Of Happiness. That’ll be a highlight off The Plastic Jam EP from 20 year Russian producer Eddie Shinn then – a man who sees fit to team up with the likes of Quincey Jointz, and labelmate Mister T. In fact it’s T who shows up on the squelchy blaxploitational jazz funk breaks of Bad Man which is not particularly slouchy itself. And then there’s 106 bpm opener Get Down which encourages a bit of a shimmy with its layered breaks, vocal chops and wah-wah. There are of course also dope chill-out cuts on here too – chief among these being the effortless head-nod cool of Plastic Beach. All in all enough material to soundtrack a party – a ‘Shinn-dig’ – if you will. Thank you – I’m here all week.
(Out now on Cold Busted)

Posted on 23rd September 2014 no comments