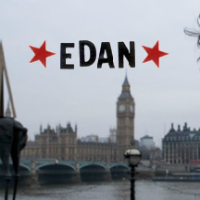 The Humble Magnificent, Edan, appears in the UK this month for a rare and brief tour starting this week. It’ll be a dj set and (on two dates) a live PA and he’ll be accompanied by Oxygen who recently featured on MB with his Freqnik & WDRE-produced single. Boston rapper/ producer Edan set the world alight in the early 2000s with two psychedelic, cut-and-paste, ‘underground’ hiphop LPs (Primitive Plus and Beauty & The Beat) which were steeped in the four skills. In fact, they were so critically acclaimed he was in danger of appearing in the Guardian or something. The only logical response to this was to effect an almost total disappearance from the scene and certainly not even think about a ‘difficult third’ album. He’s lost none of his science if the recent live recording below with Oxygen (below tour dates) is any indication though. Catch him while you can…