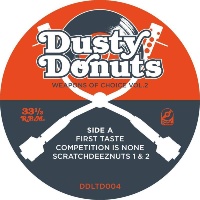 Not for the first time, Dusty Donuts confound the competition by announcing two sureshot 45s simultaneously, a double whammy in which Weapons Of Choice Vol. 2 functions as the opening salvo.  Yes, that will be a battle tool and what a battle tool at that – generated (as it is) by the combined talents of Marc Hype, DJs Goce and Robert Smith and Naughty NMX. Hot damn – that’s nearly half the whole DD crew! Fans of 90s hip-hop drum breaks will lap up the classic kick/ snare syncopation on this drop which features a lengthy intro and five scratch FX tracks that lend themselves to the art of phrase cutting. The crew reckon this one’ll go down a storm with both 45 club DJs and portablists alike and frankly the monkey’s not going to argue. As if to drive home the portablist point, this one, uncharacteristically, comes accompanied by a video featuring Marc Hype and Robert Smith availing themselves of those wide open deserted airfield-type spaces to rock the spot on their Reloop Spins.
(Out soon on Dusty Donuts)