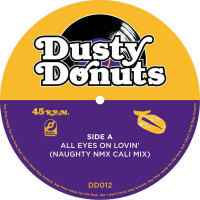 Clearly alarmed by Jim Sharp’s canny attempt to become the ultimate dj fanny-magnet on Dusty Donuts 11 with super-smooth re-versions of late 70s/ early 80s boogie funk, label mates Naughty NMX and Runex launch a counter-attack with Dusty Donuts 12 and their own re-versions of two cuts from the same era. Which also happen to be devastatingly on-trend (given the imminent release of 2Pac biopic All Eyez On Me) since they were both sampled by 2Pac. And so it is that the drums off Pac’s All Eyez On Me find their way to underpinning Linda Clifford’s Never Gonna Stop, and the break off Mr Shakur’s Keep Ya Head Up winds up significantly augmenting the percussive power of Zapp’s Be Alright for Keep You Head Alright. An impressive riposte, I think you’ll agree. One can only speculate as to the dancefloor carnage that would ensue should there ever be a ladies’ night dj battle between Sharp and the other two. Lucky this is the last Donut before the barbecue/ pool-party recess that is the summer so there’ll be plenty of time to clear up the mess.
(Out shortly on Dusty Donuts)