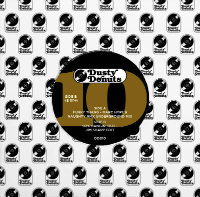 Marc Hype’s gang are straight back at it for the new year with Dusty Donuts 10 – cannily catering to both b-boy and ‘ladies’ night’ dancefloor appetites. The former is amply sustained by the Donuts crew’s stock-in-trade of mashing up originals and tracks that sample them – in this case by chucking James Brown’s vocal off My Thang (a thinly veiled take on The Isley Brothers’ It’s Your Thing) in the blender with the JB-sampling Funky Child by Lords Of The Underground. Meanwhile, on the flip Jim Sharp stirs Gwen McCrae’s 90% Of Me Is You into the beat for Main Source’s Just Hangin Out which samples both McCrae’s cut and Sister Nancy’s Bam Bam for the sistas. Tasty stuff – as ever. Also below – check out the Dusty Donuts 10 Anthology Mix that DD boss man Marc Hype has done to mark (no pun intended) this release.
(Out March on Dusty Donuts)