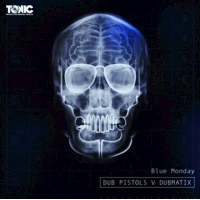 If you find a gloomy Monday three weeks into a freezing-ass January a less-than-inspiring point in the Earth’s annual trek around the sun, you’re not alone. And since said Monday shares its name with a certain uber-famous New Order tune that has a less than sunny vibe about it, Dub Pistols have hooked up with Canadian producers Dubmatix and Gaudi to produce a brace of dub reggae versions of the same in order to raise awareness of mental health issues in the music industry. This all makes perfect sense what with the Pistols’ Barry Ashworth being (along with The Specials’ Terry Hall and music photographer Kevin Cummings) a patron of charity Tonic Music For Mental Health and keen on promoting the Tonic Rider program which would seem to be essential given the omnishambles of the government’s approach to musicians during Covid.
(Out now on Cyclone Records)