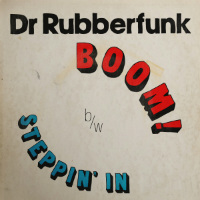 Dr Rubberfunk’s My Life At 45 (Part 4)? Boom! And, indeed, Boom! feat. Mr John Turrell – for it is precisely that nugget which forms the A-side on this particular vinyl 7″ and what a chunky slab of blues-funk it is. Expect Cream-like guitar riffage, a fat, loping drum break and JT belting it out with the best of them. Like I said – boom! Remove said disc from phonograph, turn over and replace and you’ll find an altogether jazzier piece in keys-led instro Steppin’ In which evokes nothing so much as a lazy afternoon in a Parisian bar. What more could you ask for? A dj-tool? No worries – the good doctor’s got you covered with Drummin’ In – a.k.a Steppin’ In‘s rolling and rather saucy drum break.
(Out 24 January on Jalapeno Records)