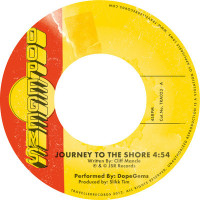 James Brown might have invented funk but some, like George Clinton, took the idea and ran with it to the very edge of pop music as we know it. Others ran wayyy beyond. That’s right folks – I’m on about the crazy spaced-out world of funky seventies jazz fusion. Or as I like to think about it, the ‘Marmite’ corner of the funk universe. Full of epic instrumental odysseys, tempo changes, and an inexplicably frequent use of both the sound of blowing wind and the vibraphone, it is an area of funk both largely ignored nowadays (some might argue with good reason) that also yields the occasional blinding sample. Dopegems have ventured to the outer reaches of funk, decided it has been criminally ignored and with this seven inch are on a Journey To The Shore which is ‘jazz-funk-fusion-speak’ for re-recording ‘forgotten classics’ in order to bring them to the public’s attention. They’ve done a pretty flawless job – and even covered the wind and vibraphone angles. Introspective, beardy hi-fi freaks and sample-fiends get on it!
(Out 23 November on Traveller Records)

Posted on 20th November 2012 no comments