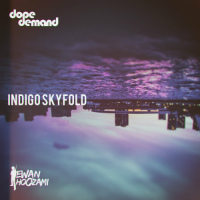 It’s June in the UK, the sun is uncharacteristically out and you fancy chilling to some UK indie-rap – oh wait…no…some dreamy electronica. Wait no! Rap. No! Electronica. Can’t decide? Maybe it’s time to give Dopedemand and Ewan Hoozami‘s new EP a whirl – Dopedemand presumably representing the hip-hop guy (with a name like that) while Ewan Hoozami must surely be Mr Electronica? Wrong. It’s the other way around – oh and Indigo Skyfold? That’s the name of the EP, not the colour your mum wants to paint the bathroom. And now that expectations have been utterly confounded – let’s consider what we’ve got – a six-track collaboration borne out of an initial enquiry from Hoozami to DD about getting some artwork done:
“Any chance of some artwork mate?”
“Nah – but what about a six-track EP? I’ll make the music – you rap.”
“Yeah alright.”
Ok – maybe it wasn’t/ isn’t exactly like that but opener Hold It Like That establishes the dreamy electronica vibe before a jangly intro to Ride On gives way to Beach Boys-esque ‘woos’ and Hoozami first singing, then rapping about his misspent youth smoking weed and skateboarding around Bristol’s College Green doing fakie pop shove-its. The title track continues the rap-tronica over a more hectic broken beat and then it’s time for a Rap Sandwich which features a machine-gun – er – rap and almost rock-like vocal hook from Hoozami over disco-ish basswork. Tuff is all dreamy synths and clattering beats and then Hoozami’s back to channel Sugarhill via the Dead Kennedys on Way To Go and provide another pleasing sung vocal hook. Indigo Skyfold then – for when you can’t decide what to listen to when the sun’s out.
(Out now on Particle Zoo Recordings)