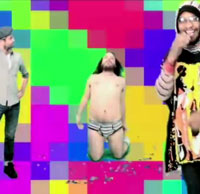 Doomtree, the unconventional Minnesotan hip-hop collective with a name that sounds like a black metal band, attempt to break Europe with a single that sounds like a porn film. Should be amusing when they appear on a bill in the Ukraine supporting Dimmu Borgir. I’m just fucking with you. They’ve actually been supporting the ‘redneck rapper from Alabama’ – Yelawolf on his Euro tour which ends – er – tomorrow. In Birmingham. A stylish exit then, I think we can all agree. Bangarang (which is mainly a lively and surprisingly pop-savvy paean to Doomtree themselves) will be available for free download from 28 May until which time you’ll just have to sing along to the video which features the track’s lyrics and an appearance by balding, beer-bellied sex dwarf joker Har Mar Superstar who karaokes along to the band himself and strips to his birthday suit in what I choose to read as a biting satire of shite-awful musical talent shows.