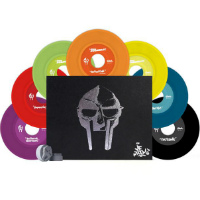 We’re DOOM-ed! Say that out loud and people will either think Trump’s pressed the button or repeat the words back to you in a dodgy Scottish accent while raising their eyebrows and showing the whites of their eyes. In print though, it’s quite obvious that a reference is being made to something Daniel Dumile-related. And that something is an Operation Doomsday seven inch boxset in which all the tracks that make up first DOOM LP, are presented to you in the form of seven 45s by deluxe re-issue label Get On Down. Of course, as this is a Get On Down release, that’s not all you’re getting. Oh dear me, no. For a start, the 7″s are in seven different colours of vinyl. Then there’s the fact that they all have picture sleeves with new artwork by Operation Doomsday cover artist Lord Scotch and come in a black leatherette box decorated with DOOM’s mask and graff logo in silver on the outside and a previously unseen DOOM drawing inside. Oh and there’s two 45 adapters which each featuring a relief of DOOM’s mask. Not that any fucker’s ever going to play the wax or, you know, actually use the adapters, because that would lower their value. Unless you were so loaded you could afford two boxsets of course. Ah yes, the price. Stateside, this’ll set you back just shy of seventy-five bucks. A snip! Oligarchs take note. Limited to 1500 copies.
(Out 30 March on Metal Face Records. Pre-order HERE)