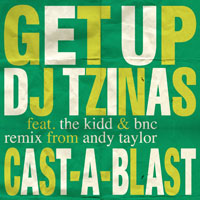 It’s ‘vintage sound of the west coast underground’ time at the Cast-A-Blast label as DJTzinas and emcee mates The Kidd and BNC get all year two thousand on your ass with rather solid hip-hop cut Get Up. They want you to get up of course (how else are you going to get down?) and do so with a booming piano-led beat, understated soul samples, scratching and the rhyme skills of the aforementioned emcees. As if that’s not enough, Latin breaks legend Andy Taylor gets his cholo on and takes it all south of the border with a barrio beat. If you play this one in the car, don’t forget wraparound shades, extra massive Dickies shorts and some sort of Spanish tattoo enscription on your neck in gothic lettering. Also – while we’re on the topic – that shitty old steering wheel would look much better replaced by a welded chain link one wouldn’t it…? Me gusta!
(Out now on Cast-A-Blast)

(PRESS RELEASE)
DJ Tzinas (of Resence fame) with “Get Up”, A text-book Monster of a Hip Hop cut, Overloaded with flavour and reminiscent of the ground-breaking underground movement from the turn of the Millenium such as Jurassic 5, Dilated Peoples, Blackalicious etc. With truly neck-snapping percussion, a driving bassline, an insanely addictive piano riff, a handful of subtly used soul samples and an underlying brass lick that complement searing & quotable lyrics from emcee’s The Kidd & BNC, blessing your ears with a sonically cohesive statement.
Andy Taylor is on board with the Remix duties taking his version into Cumbia territory with a healthy dose of Latin style beats and more than just a hint of a bubbling carnival feel to the instrumentation.

Highly recommended for all Hip Hop, Latin Music & Breaks lovers. A solid release that ticks multiple boxes, this EP will please Cast-a-Blast fans and newcomers to the label alike with its intelligent rhymes and diverse yet complimentary mixes.

Posted on 18th November 2011 no comments