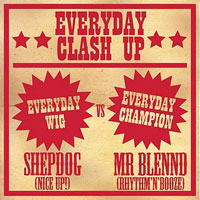 The thing about making bootlegs or mash-ups is that you need to get your vocals from somewhere. Sometimes a record company will lob a producer a free vocal stem if they think the remix will boost sales of the original but often they come from officially released acapellas. But the thing about that is that not as many people officially release acapellas as you might think. And the thing about that is that you might find someone’s already used the acapella you were going to use. Imagine the surprise, then, of the Nice Up label’s Shepdog to find out that another big name on the reggae mash-up scene had used Arrested Development’s Everyday People. That other individual was he who sometimes travels (rather thinly disguised it’s true) by the name of Mr Blennd of the Rhythm N Booze imprint. There was only one thing to do – put them up for free download and have a reggae mash-up, everyday clash-up to find out which one was top rankin’. Naturally, I think they’re both flames but find out for yourself here:
FREE DOWNLOAD – Everyday Wig (DJ Shepdog)
FREE DOWNLOAD – Everyday Champion (Mr Blennd)
…maybe there’ll be a double A-side 7″ at some point…
niceupyourarea.blogspot.com
Mr Blennd – Myspace