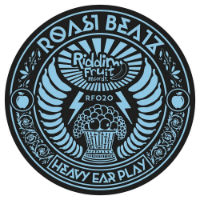 Roast Beatz garners some impressive allies to drop verbals on his Heavy Ear Play EP in the form of Action Bronson and Stig Of The Dump. NY rapper Bronson appears on no fewer than two cuts – the first (and title) track along with Stig and Brotherman and closer 5 Star General in the company of Phoenix Da Icefire. Just as well our man’s up to the job right? Evidence of this can be found in the beats of course, which Beatz has cooked up punishingly chunky and not a little funky – jump-up ghetto funk crossover number Humble Pie, for example, on which UK emcee Dabbla appears. It’s latin-inflected monster (and vehicle for emcee Rtkal) Oh Yeh which is braised to perfection though.
(Out 6 November on Riddim Fruit)