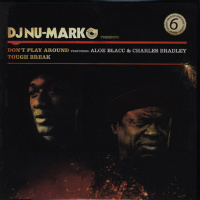 Don’t Play Around is the final single off album Broken Sunlight from former Jurassic 5 dj/ producer Nu-Mark. And he’s clearly a man to heed his own advice on this solid slice of boom-bap soul, employing not one but two heavyweight voices and simultaneously uniting two generations of soul brothers in the form of Aloe Blacc and Charles Bradley. Blacc delivers a Stevie Wonder-like melody, Charles Bradley adds the JB-style grunts and Uncle Nu drops a trademark neck snap beat. Cop it for free via the link below and have a listen on the soundcloud player.

Nu-Mark has taken an inventive approach to the release of Broken Sunlight having dropped nearly every track as a limited free download prior to its vinyl release. And he has released every track on vinyl as a limited ten inch, because, yes, the quality is that good. Trusty Juno player below and links to what the monkey had to say about previous singles below that…
(DJ Nu-Mark – Broken Sunlight out now on Hot Plate)

Posted on 12th February 2013 no comments