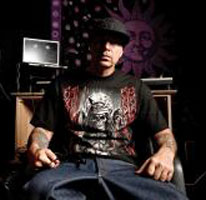 Some men dump the wife and get a newer model, some men spunk their savings on what they fondly imagine is a four-wheel pussy magnet but DJ Muggs, the man behind the beat for such hip-hop classics as Cypress Hill’s Insane In The Brain and The House Of Pain’s Jump Around is making a dubstep LP. I shit you not. Yep, he’s back later in the year with Bass In Your Face a project which, despite tripping everything that can flash or beep in mid-life crisis alert central, might, just might, on the evidence of the video press release below, be quite interesting. You can’t deny the man’s pedigree.

DJ MUGGS has long been the face of an entire movement of hip-hop, captivating the world as the producer of the iconic group CYPRESS HILL, and producing seven studio albums for the platinum outfit. MUGGS has also scored hits with Ice Cube (“Check Yo Self”) and House of Pain (“Jump Around”) along with producing cuts for Dr. Dre, Mobb Deep, RZA, GZA, KRS One, Goodie Mob and Wyclef Jean amongst others. Looking back on the stats of his storied career, MUGGS has sold 17 million records with CYPRESS HILL and is a four-time Grammy nominee.

Clearly a step ahead of the rest, now DJ MUGGS has returned with a new solo album ‘Bass For Your Face’, which is set to be released later this year. ‘Bass For Your Face’ is a dubstep album unlike anything else. Combining elements of dub, glitch, rock and hip hop, DJ MUGGS has created another masterpiece. “Bass for your face is a hip hop hybrid album with elements of glitch, dubstep ,electronic and rock,” commented DJ Muggs. “It’s where I am at the moment in my never ending quest to push the envelope of sounds and styles.”

One Response to DJ MUGGS: Bass For Your Face – New album update – 2011