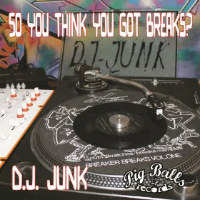 The new one from long-serving UK b-boy, dj/producer DJ Junk is this new album on Pulpfusion’s Pigballs label – So You Think You Got Breaks? If you’re the sort of person who knows their Assembly Line break from their Honky Games break (and even if you’re not) Junk’s here to provide you with another 22 (!) b-boy breaks cuts to file alongside the likes of your Hero No. 7, DJ Moar and K.Sabroso gear. In other words that’s 22 tracks of drum funk catnip ranging from the 116 to 141 bpm mark or near enough sufficient material to soundtrack an entire breakdance competition. Expect to hear Latin, blaxploitation, old school hip-hop and eastern motifs and keep an ear open for the employment of the drums from Kelvin Stardust by UK mod-funk legends Big Boss Man. Junk’s understandable endorsement of this break is reinforced by the fact that he uses them twice, once on Bigbossman and later on the James Bond-sampling Live And Let Die. It’s enough to make the sample police give in and cry…Only the humble Juno player I’m afraid – see below:
(Out now on Pig Balls Records)