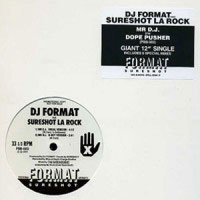 Bloody hell it’s been a while – and yet DJ Format has not forgotten that his people need him for lo – he returns bearing fat beats and basslines that envelope you in their warmth like a great big friendly trucker. Or something. As always, he’s hooked himself up with a rhyme scientist in the shape of the mysterious Sureshot La Rock (crate digger extraordinaire!) who holds forth on vocal cuts of both tracks – bigging up Format’s skills on Mr DJ and the lyrical dopeness that he himself is pushing here on – er – Dope Pusher. This being Format you get instrumental versions of both tracks and the monstrous instrumental cut-n-paste Here Comes The Dope Pusher – all with more samples in them than a hospital lab. Mr DJ is the big headnod groove, Dope Pusher is one for the b-boys. Bodes well for the LP.

(PRESS RELEASE) At last, DJ Format returns with exactly the type of Hip Hop we’ve all been missing! MR DJ sees Sureshot La Rock playfully bragging about his DJ partner’s skills, constantly setting Format up to supply the punchline with a scratched vocal sample. Sureshot doesn’t over-complicate the rhymes, instead keeping it simple & funky to fit Format’s timeless sound perfectly as they weave effortlessly back & forth. Format, as ever the perfectionist was not happy just to make a straight instrumental version of MR DJ and instead created the B-BOY VERSION that sees him cutting & scratching the many different breaks,beats & samples that were too numerous to all fit into the vocal version.

DOPE PUSHER has a more raw sound to it with Sureshot La Rock getting technical with some ‘dope dealing’ metaphors and several nods back to Big Daddy Kane, an obvious inspiration for the song.
Sureshot’s performance leaves you wondering how the hell you’ve never heard of him until now!

Apparently, HERE COMES THE DOPE PUSHER originally began it’s life as the intended backing track for Sureshot to deliver his ‘Dope Pusher’ lyrics but with so many intricate samples to fit into the track,Format opted to instead develop it into this instrumental Hip Hop-meets-Psych cut ‘n’ paste monster that cleverly samples ’60s Rock records,classic Hip Hop records and includes an unhinged spoken word section warning of the evil ‘Dope Pusher’. DJ Format is currently putting the finishing touches on his new album.