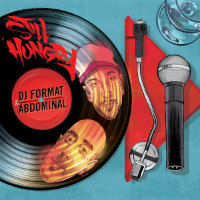 You have to wonder if it ever occurred to DJ Format and MC Abdominal when their first collaboration, Ill Culinary Behaviour, dropped in 2001, that they’d still have an appetite for making quality boom-bap nearly two decades later. Back then the underground hip-hop scene was in rude health (like those who made the music) but over the intervening years, times have changed, audience tastes have altered and the scene is a shadow of its former self. One thing hasn’t changed however – and that is that Format and Abs are Still Hungry. Now, after three singles and videos and much interweb rumour, the LP is finally here. Also, so invigorating is Still Hungry, in fact, that it sounds like a debut album – which in a way it is since, believe it or not, despite multiple appearances on each other’s work and numerous Abs and Format singles, this is the first full-length collaboration between the Brighton DJ and the Toronto emcee. And for all knowing gags about being ‘past it’ – “You say old, we say refined, you say stale, we say better with time” – this album is decidedly fresh.

One reason for this is the way Format’s sample sources appear to have leaned more towards the funky end of obscure psych records – a trend presaged by not only cuts like Angry Birds on his The Foremost LP collab. with Phill Most Chill from a couple of years ago but also last year’s release of Format-curated BBE comp. DJ Format’s Psych Out – the sales notes for which described the content as the stuff which he wished he could get away with playing in DJ sets. It’s a sound you can especially pick out on opening sample collage Appetizer, the garagey guitars of Behind The Scenes and the crazy organs of Diamond Hammer. Meanwhile Abs’ flair for humorous self-deprecation is un-diminished as he considers what to eat for lunch on No Time lest he acquire the new moniker of ‘MC Flabs’. If you want funkified dancefloor cuts you’ll certainly be happy too. Most of the material on here is uptempo bangers anyway but while the 118 bpm windmilling drums, elastic bass and sixties guitar chops of We’re Back and the 107 bpm crowd-pleaser We Say are neither the fastest nor the slowest tracks, they’re both hands-in-the-air sureshots. Two reasons then, among many, why Still Hungry should hit the spot.
(Out now HERE)