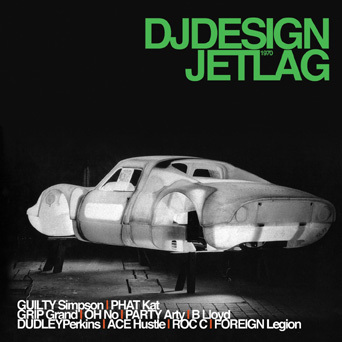 Like underground hip-hop but take guilty pleasure in the beats from producers like The Neptunes? Wish that those beats were teamed with credible MCs? Jetlag is that rare thing – an underground hip-hop LP that doesn’t seek to emulate a bygone era and for the few faults it does have – this is a good thing. Instead Design drops modern sounding beats that sound like they were created to move a dancefloor unlike – say – the clankiness of stuff from the Def Jux stable. As such it recalls Q Tip’s 1999 LP Amplified (wicked beats – even if the lyrics were a bit wack) and Foreign Legion’s 2003 LP Playtight – coincidentally a band whose former DJ was someone called…DJ Design. Jetlag is the product of four or so years work and contains the variety that you might expect from being made over such a length of time and a whole host of underground MCs.

Things kick off with Phat Cat and Grip Grand spitting battle rhymes over the sparse beats and Ofra Haza sounding chant of Wild Ones before Oh No and Roc C take over for the Play. What sounds like a loop jacked from a sixties psychedelic track prepares the ground for super-heavy cut and paste beats, and a portrait of a femme fatale gangster, “She a thoroughbred raised by the hustlers/ never been a customer, always on the come up”. This brace of tracks constitute a dope opening to an LP though the smooth blandness of the next two tracks – the B Lloyd featuring All A Dream and the Dudley Perkins/ Oh No showcase Better Days sees the pace slacken somewhat. Not that you need worry overly as next up is the album highlight – an utter bomb-track with Guilty Simpson coming correct over some phat sci fi boom bap shit. Synths shimmer in the background, piano stabs punctuate the foreground, the beat is kick drum heavy and Simpson’s battle flows set to shut down all rivals – so it’ll come as no surprise that it’s titled Ferocious. Unfortunately it’s one of those tracks that no matter how good what follows is – you just want to listen to it again. Unfortunate because a lot of what follows is pretty damn good. Grip Grand rocks up again on the fuzzed out guitar riff heavy B-side Too and B Lloyd’s second track Major is cousin to DJ Shadow’s Q Tip/ Lateef collab. Enuff. Get On The Floor will have people stepping up to do just that and is a synth-rich wig-out that recalls the Knight Rider theme. Ace Hustle and Foreign Legion also turn up on quality tracks towards the end of the LP. Overall Jetlag contains numerous good tracks and at least one all-time classic (Ferocious) but if I have any complaint at all it’s that the LP could be more consistent in terms of pace and quality and could have been pruned of one or two pieces of filler. Clearly a man with a sense of humour, Design closes the LP with the horrible tech-house of Gates Of Steel. I probably should keep an open mind about this track or something but fuck that.
Out now on Look Records.