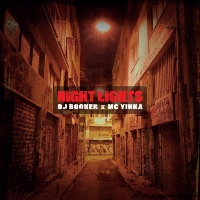 ‘How would Roc Marciano and MF Doom sound if they were born in Athens to immigrant parents?’ asks the press release for DJ Booker X MC Yinka’s debut LP, Night Lights, before suggesting that these two Athenians are the answer. It’s a big claim but then hip-hop has always thrived on braggadocio and, as it turns out, these two do have the skills to pay the bills even if (unlike Marciano and Doom) each clearly has his own province when it comes to production (Booker) and mic (Yinka).

The Night Lights LP has the sound of late 90s/ early 2000s hip-hop firmly in its glare and throughout the ten-tracker tempos are pretty much-constrained around the low to mid-80s bpms for the fully authentic stoned-atmosphere and hell – they’ve even invited former Def Jux signing Mr Lif along for the party. Well, I say ‘party’- the vibe is a bit more serious than that what with Yinka finding lyrical ‘inspiration in blighted areas, urban struggles and multicultural subcultures’ and the results are every bit as grimy as the cover suggests. The intro displays virtuoso scratching from Booker and then we’re into Representing Rats which could’ve come straight off 2001’s Def Jux Presents comp. and gives every impression (one which, incidentally, never falters throughout the LP) that Yinka is actually a Stateside emcee. The next one, Stretch, with a vaguely Roots Manuva-ish/ Witness bassline, is the one on which Mr Lif appears taking the whole second half and showing he’s very much still conscious – in all senses of the word. Elsewhere, the title track is wistful rather than brooding, Era Of Libra gets a vintage RZA-style beat and Twinsanity guest on Athens Shitty where all three emcees consider the current state of the Greek political sphere which (appropriately enough) appears to resemble the Augean Stables. All that remains are the claustrophobic Dope Zone with vocals to the fore and broken beat-isms behind, New Genesis with similar atmospherics combined with Eastern sonics and last cut Never In This World maintaining the spaced out vibe until the outro. It might be nearly a generation since the heyday of the early noughties underground sound but it seems the light hasn’t gone out yet.
(Out now on Mind The Wax)