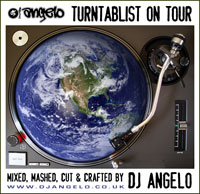 DJ Angelo styles along with another classic mixtape. He cuts the music with so much class this is basically a bust in the ass for – well – pretty much anyone else. Turntablist On Tour finds Angelo skipping across genres like a cat on hot bricks – if genres were bricks and he was a cat – which they aren’t and he isn’t but you get the picture. Also since he’s such a genre slag you’ll find him promiscously and seamlessly scratching and cutting from hip-hop to all that nufunk and ghettofunk shenanigans, taking in baile funk, dnb, dubstep, latin grooves and electro inserting all manner of bizarre soundbites inbetween. I’m sure I heard the intro from Duffy’s Mercy in there about halfway through. In a good way. Vocally, Q-Tip, Aloe Blacc, The Beasties, MC Coppa (and a million others) appear but things kick off with a Lateef Truth Speaker’s Champion Sound vocal for Fatboy Slim over The Prodigy’s Stand Up plus the Beatnuts and various ragga vocals. The man’s got bare acapellas, I’ll say that. Bigness then and right up the monkey’s street – which probably means yours too if you’re here. Which means it’s pretty much your duty to give such a dextrous decks perfectionist some of your time. You’ll be glad you did. N.B. Soundcloud virgin? The fat down arrow on righthand side of player is the download option.
DJ Angelo – Turntablist On Tour by DJ Angelo