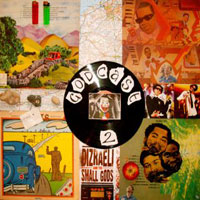 They’re a bit folk, a bit hip-hop – hmmm – what can we call it? Putting that knotty conundrum to the side for a minute there’s just time to say that Dizraeli and his Small Gods crew (now including DJ Downlow of Itch FM) have started up a regular monthly podcast. Or ‘Godcast’ as they’re calling it. And actually, just for that shocking play on words, they deserve to be called ‘folk-hop.’ Freely downloadable, you can cop said podcasts and such content as Downlow on the cut, Dizraeli doing freestyle acapellas, and lots of biggin-up of the Bristol hip-hop massive (big up!) that’ll have you dusting off your Parlour Talk wax (Beanz!). To download the Godcast for October and November, get your ass over to dizraeli.com right now fam! Find out more about last single HERE, or just listen to it below, if you’re feeling lazy…

(PRESS RELEASE)
THE NOVEMBER GODCAST IS HERE!
After getting so much love for the first Small Gods podcast, Dizraeli and Downlow had no option but to make the second one even better. Another journey through sound and the city, this time featuring an in-depth interview with a very special guest.
WHAT THEY SAID ABOUT THE OCTOBER PODCAST
Dizraeli and Downlow emerge stinking from the cave with a newly cobbled monster on a leash: a full hour of Dizraeli exclusives and tracks from some of the importantest people in folk and hiphop, from John Tams to Jam Baxter.

Posted on 28th November 2011 no comments