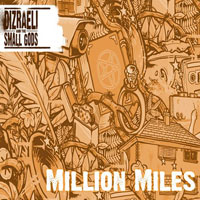 If you’ve been missing UK folk-hop in the hiatus occasioned by the lack of anything from either Dizraeli or, say, Tom Caruana’s alter-ego Tom Bombadeal in the last couple of years, fear not, for the Diz is back leading the vanguard of the beardy beats brigade. And this new single from Dizraeli and crew The Small Gods (and when I say ‘crew’ I imagine more of a village gathering) has got some trippy lyrics. According to the press release, it’s all about, “love in a time of madness,” (which is what you get when you mix home-brewed real ale and potent scrumpy) from our hoarse-voiced (something else you get when you mix home-brewed real ale and potent scrumpy) hero. It also comes bearing fully-organic breaks, some frantic fiddling, sweet female folk harmonies (courtesy of Cate Ferris) and furious scratching – ably performed using a sharpened carrot on a cross section of a tree. Alright, some of that’s not true. The fiddling’s not all frantic for example. Basically Million Miles hauls folk music convincingly into the twenty-first century in a way that retains a respect for the old ways. And it’s free. Nuff said – download below: