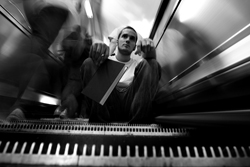 (PRESS RELEASE) Having made his name on stages around the world as frontman for the dub-hiphop band Bad Science, and picked up a string of awards as a slam poet (including BBC Radio 4 National Poetry Slam Winner and Farrago UK Slam Champion), rapper, singer and multi-instrumentalist Dizraeli has gone solo to craft his very own album. He says, “Hiphop is folk music for the modern age; real stories of ordinary people, spoken in their own voices. It’s music that takes part in our everyday conversations, and isn’t afraid to name names. I love that”.

‘Engurland (City Shanties)’, Dizraeli’s debut, makes the link between the old folk and the new, drawing on sea shanties, gospel and blues to create a form of hiphop that speaks for the streets and the valleys in equal measures. Journey with Dizraeli through the aisles of Tesco and the factory corridors, from the vomit-slicked Bristol backstreets to the grey pebbles of Brighton beach. This is 21st century England, told through stories of love and grief and defiance. Musically, the album echoes the drunken sway of Tom Waits’ Rain Dogs and the grit of Jay Dee’s production; it’s full of the sounds of Engurland – slamming doors and traffic whooshing, children’s voices and shopping-trolley rivers, as well as features from some of the most exciting emerging singers and instrumentalists around.

‘Reach Out’, the first single from the album, follows two lonely old men, on separate journeys through the rain-stricken twilight. It’s set to a stomping blues backbeat, and features the gorgeous harmonies of Cate Ferris, better known as backing singer for Martha Tilston. ‘Reach out’ is available now for free download on www.dizraeli.com, as well as on iTunes, Amazon, Amie St and other melodic webspots.

‘Engurland (City Shanties)’ will be released at the end of September, followed by a tour in late October / early November, for which Dizraeli will be joined by a blindingly gifted set of musicians on double bass, beatbox, cuts, accordion and strings. Gigs at London’s Cargo, Bristol, Brighton, Bath and the Eden Project in Cornwall have already been confirmed. In the meantime, keep your ears peeled for ‘Bomb Tesco’, the next single, which will emerge alongside a guerrilla video sometime in the next fortnight…

Listen to Dizraeli – Reach Out