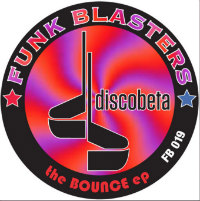 Discobeta follow up their Worthwhile EP on Morlack’s Funk Blasters label with the equally worthwhile The Bounce EP. Side-stepping the tinny digital drums trap that claims more than its fair share of victims at the ghetto funk end of the party breaks scene this pair opt for funkier and more interesting percussive patterns, judicious rather than profligate use of the wobble and heavy electro-synth style action as on Good Foot and Who Da Phunk. They also aren’t beyond dropping a bootleg of a hip-hop cut that hasn’t already been rinsed a million times – in this case Twin Hype’s ’89 classic Do It To The Crowd – now re-packaged for 2015 as the punishingly heavy Come Correct. It certainly does.
(Out 5 February 2014 on Funk Blasters)