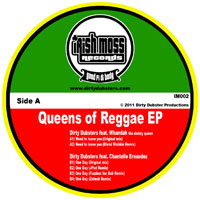 Dirty Dubsters present us with a brace of reggae queens and I don’t mean in the flamboyant-dress-broad-shoulders-adam’s-apple-covers-of-Bob-Marley sense. Nope, more in the none mo’ dutty dancehall ruling, all-woman pairing of Whandah The Dainty Queen and Chantelle Ernandez. Don’t mess! Two royal slices of reggae heat then – first up the hip-hop skank of Need To Leave You where Whandah basically tells her presumptious bloke to ‘step’ and secondly the more soulful/ rnb ting that is One Day. Blend Mishkin goes on a hard dancehall remix tip for the first while no less than 3 heads have a have a crack at reversioning One Day in the shape of Jpod, Zetek and Fuzzbox Inc. Riddim!
(Out 7 April on Irish Moss)
IM002 – Queens of Reggae EP by Irish Moss Records
(PRESS RELEASE) Those skanking bass mash monsters, The Dirty Dubsters, are here once again for the second release on the newly minted Irish Moss label. This time the vocal duties are firmly in the hands of the ladies. First up is Whandah The Dainty Queen on “Need to Leave You” who rids herself of her no-good man with her direct but graceful flow as the Dubsters slide some deep bass, droning trumpets, an acid line and even a hint of the Beatles. Flip for a tough bashment treatment courtesy of Greece’s Blend Mishkin. Next one up is on a funky reggae tip, with Jamaican Chantelle Ernandez on “One Day” and a tale of karmic retribution, as her soulful vocals soar above the Dubster’s dubby hip-hop groove. On the remix rota the unmistakable sound of remixes of Canada’s Jpod flipping the script completely and turning out a hard bass squelching beat that suits the vocal sublimely.

And because we love you so much, we’ve also got Jersey’s own funk brothers Fuzzbox Inc and ZETEK on bonus remix duties bringing two very different takes with the fantastically Dubby leanings of the Fuzzbox mix and the Liquid DnB version from Zetek!

Out on Irish Moss Records (Digital) on the 7th April 2011