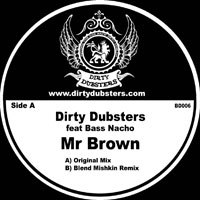 The Dirty Swingers EP might have been the ‘Dubsters first release since the mighty Big Tings but this huge Marley-fied, ragga-hop booty is its spiritual successor. It’s such an obviously gargantuan club hit that its dancefloor pull must rival the gravitational effect of a medium-sized planet. Drop this in a club and even the wallflowers will be helplessly sucked into a heaving morass of sweaty, grinding bodies while the bar staff will feel compelled to bogle on the bar itself. It’s amazing what can happen when you take a less obvious slice of Bob Marley’s back catalogue, wobble-up the b-line, fat up the rhythm generally and sprinkle Floridian rasta and legend-in-the-making, Bass Nacho on top. And it’ll be out on vinyl too!
(Out March on Breakdown Records )
Dirty Dubsters Feat. Bass Nacho Mr. Brown boot by DirtyDubsters
(PRESS RELEASE) Dirty Dubsters feat. Bass Nacho – Mr Brown (7” vinyl)
BreakDown Records (BD006)

After Dirty Dubsters and Bass Nacho’s last collaboration together “Big Tings”, permanently tattooed itself onto the cerebellums of dub savvy clubbers across the globe, the only real way to possibly top it is to enlist the talents of the most Reggae on high himself, the all conquering Bob Marley. The rapid fire lyrical skills of Floridian Bass Nacho are launched into the stratosphere with a beefed up behemoth of bass line half inched from Mr Marley but with the Dirty Dubsters signature skanking hip hop sound stamped all over it. On the Flip side we have Athens based bad man Blend Mishkin who switches up styles for his remix, taking the track down a deeper, funkier but no less skanking dub house path.

A very limited release 7” vinyl is due for release in March 2011 on BreakDown Records, Distributed through Kudos and available in all good record shops world wide.

Posted on 5th February 2011 no comments