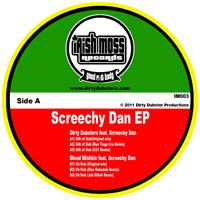 For their third release Irish Moss bring us the Screechy Dan EP featuring veteran NY toaster Screechy Dan of Kenny Dope-produced Boomin’ In Ya Jeep fame. It’s a six tracker which is a lot of screeching, I think you’ll agree – but is our man Dan up to it? Does a bear shit on the Pope? Of course he is! Actually, in reality it’s two tracks with a brace of remixes apiece. Dirty Dubsters provide ridiculously heavy dub weaponry on Gift Of Dub with punishing snares and a tempo switch about halfway through which gets a dnb rerub from Run Tingz Cru and a breaks makeover from DJ Wood. If possible, Athenian dub maestro Blend Mishkin then ups the ante with an Olympian beat for Uh Huh which Max RubaDub and Jah Billah both have a crack at remixing. Watch your speakers and your windows. And watch out for more Screechy Dan on the forthcoming Oh No Dirty Dubplate…
(Out September on Irish Moss Records)

(PRESS RELEASE)
Although rookies on the reggae scene Irish Moss Records are definitely no amateurs. With their first two releases Lyrical Jam and Queens of Reggae they weighed into the ring with the style and swagger of a champion. Now, for the third bout, they are entering the heavyweight division with the legendary dancehall MC, New York’s Screechy Dan, ducking and weaving with finesse on the microphone, complete with a host of hard punching remixers in his corner. Expect these tunes to bring a TKO to any dance floor.

Screechy brings a message of peace, love and unity on “Gift of Dub” upon a spacious skanking phat bass riddim served up by Dublin’s Dirty Dubsters, beware of the style switch up halfway as the Amens are let loose. Run Tingz Cru (ft Blackout Jah) ups the energy and flips the tune into a peak time ragga jump up jungle monster.

Athenian Blend Mishkin takes over the boards on “Uh Huh” with deep and heavy vibes, Screechy is in party mode, urging us to get our drink and dance on as the horn section echo off the walls. While Max RubaDub keeps the mood of the original on his snappy mix but whacks the bass bounce factor up to the heights.