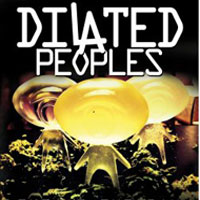 Last I heard, celebrated ‘underground’ LA hip-hop trio Dilated Peoples were due to release their fifth official studio LP this year. It transpires (in time-honoured rap fashion) that there might a slight delay. Why? Because they’ve not actually recorded it yet. The PR in my inbox suggests we might expect the goods some time in spring next year despite the fact that they’ve had a name for it (Directors Of Photography) since at least February this year. I don’t particularly have an opinion about that but my vinyl copy of the band’s 2001 LP Expansion Team described it as ‘arse-backwards,’ pessimistically speculating about the chances of a “genuine return to form as opposed to a weak-ass trading on former glories.” I did point out that this was the not the sort of viewpoint to endear vinyl to people who consider the format ‘past it’ but my words fell on def grooves.

While you wait for next spring – there’s a gig at LA’s The Roxy on 26 October, if you’re in the (neighbour)hood and whether you are or not – here’s a Brucie bonus video:

One Response to DILATED PEOPLES: New LP ‘Directors Of Photography’ set for 2013 release