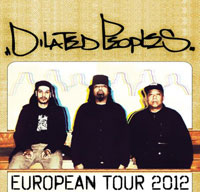 It says here that, ”since their inception, Dilated Peoples have been energizing the rap underground.” I was surprised to learn that they were still energizing anything since their last LP was six years ago and the last thing of any actual note that they did was This Way back in 2004. Still, on the scale of criminal porkies it’s hardly ‘they definitely have weapons of mass destruction,’ ‘the economy’s fine’ or ‘yes, I do deserve my obscene bonus’ is it? In any case we are talking about PR guff here rather than the words of the band themselves. Why not rather highlight the fact that Dilated have a new LP, Directors Of Photography, due out this year – hence presumably this tour? Just the one UK date though…Let’s hope they’ve remembered to pack a few decent beats and rhymes this time as the competition is either dope (The Funk League, Danny Spice) or still dope – like recent and forthcoming material from contemporaries of Dilated such as Ugly Duckling, People Under The Stairs and DJ Format. In case you never caught (or were too young to catch) Dilated back in the day – enjoy the Brucie bonus vid after the tour dates…

Posted on 7th February 2012 no comments