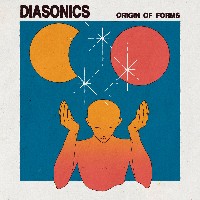 Did somebody say ‘Hussar funk’? Well, actually Diasonics themselves did though it’s as good a term as any to describe the fresh blend of super crisp and funky drum breaks that they couple with Eastern-tinged cinematic and psychedelic sounds. If you caught previous singles Gurami and Deviants, you’ll know exactly what the monkey’s on about and while both of those are on the Origin Of Forms LP they far from the only treats on it.

Said album is in fact a twelve-track set which opens with shimmering intro to Alamandine, a track that resolves itself into a brisk and fidgety slice of funky psychedelia. Next up are the loping drums and smouldering guitar of Gurami before the pace picks up again with the gritty crime funk of Ink. The ominous Salmanazar is one of the monkey’s favourite tracks and features a squalling guitar riff that might have been lifted from a much louder psych-rock record (say by Screaming Trees) though the band juxtapose it with restrained bass, organ and drums creating the impression of a beast only just kept in check. The fidgety Affair provides more cinematic fare and then it’s the turn of LP centrepiece and almost title track Origin – a brooding number that slows things right down before former single Deviants arrives with the monkey’s favourite bassline of the album. Spiders is by turns tense and reflective and sounds like something from a 70s Eastern bloc crime flick (no doubt the intention) while the laid back Kayana is just reflective and Andromeda is another monkey favourite due to having the best drum break of the LP. There are more soundtrack type thrills to be had on Kite upon which a lengthy intro eventually gives way (much like a Lada finally bursting into life after multiple key turns in the ignition) to a lively uptempo car chase affair (it was a Lada with a nitro injection, obviously) complete with bongo breakdown. Finally, comes closer Balance – another evocative slowie – the one to which you imagine a hardbitten Moscow detective walking away from the carnage his private life has become due to a particularly devastating case. You on the other hand will be walking away whistling numerous tunes that have inveigled their way into your consciousness.
(Out now on Record Kicks)

Posted on 13th February 2022 no comments