DEROBERT & THE HALF TRUTHS: Thievin’ And Robbin 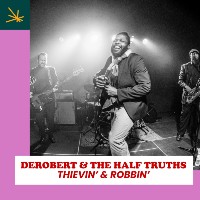 Blimey – it’s been eight years since Nashville’s DeRobert & The Half Truths featured on MB but it’s good to see that DeRobert’s voice has only gained in power in that time and the Half Truths’ playing is tight as ever. New one Thievin’ And Robbin is yet another single in German label Golden Rules’ digital singles series showcasing the best in contemporary retro soul (as opposed to contemporary soul) which will shortly culminate in a summer vinyl LP release. Having dropped a track roughly every fortnight since late January, they now appear to be upping the ante with three since 2* May. This one opens with just throbbing bass and DeRobert warning the audience about his dodgy mates. Cue the rest of the band joining in and you’ve got an insistent uptempo funk-soul groove replete with chanking rhythm guitar and horns on the hook. Which will never get old.
(Out now on Golden Rules)