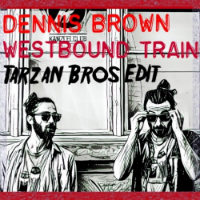 It’s nearly summer which means it’s nearly reggae, reggae time which means it is time for Tarzan Bros. to swing into action with an nifty early reggae edit. In this instance, the source material was the biggest Jamaican hit of 1973 – Dennis Brown’s Westbound Train and the edit finds Brown westbound in the twenty-first century. Not in an egregious way of course – this isn’t Southern Railways. Quite the opposite in fact since the journey from start to finish is rather quicker and the ‘vehicle’, as it were, has more power at the bottom end. Perhaps Tarzan Bros. should be in charge of re-unifying and re-nationalising UK rail. Listen below; cop it HERE.