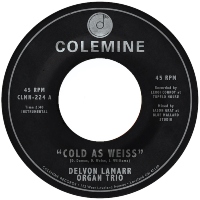 Like its predecessor Jimmy’s Groove released at the start of the month, new Delvon Lamarr Organ Trio single Cold As Weiss is a solely digital release. At the moment anyway, though if there are no plans for wax ultimately, I suspect there will a clamour for it before much longer. Why? Because this is essentially two minutes, forty seconds of ice-cold funky class. Apparently a celebration of DLO3’s new permanent drummer, Dan Weiss, Cold As Weiss is, like Jimmy’s Groove, a sparse arrangement (well, they are a trio!) but sounds even more minimal, perhaps because it’s slightly slower, accentuating the spaces between notes and beats but also because a lot of the guitar/organ interplay is almost as much rhythmic stabs (cf. “Maceo, what’s this?” “A guitar Mr Brown.” “No it’s not. Peewee what’s this?” “A drum Mr Brown.” “Now we’re getting it!”) as it is melodic motifs.   As for the drums – well they’re positively hypnotic in their precision and when the fills and breakdowns come they cut like a knife!
(Out now on Colemine Records)