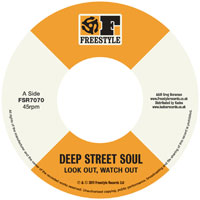 Whoop, whoop! Australia’s Deep Street Soul return with even more fuzz in their funk than before with this double whammy. The A side is a funky-ass slice of uptempo garage-soul featuring the band’s new vocalist – the appropriately raucous-voiced May Johnston who lets rip on the uptempo title track of the DSS’ forthcoming second LP Look Out, Watch Out. As with their last 45 the flip is soul sister vocal too and Greenbacks-girl Shirley Davis is back with a mighty cover of soul king Clarence Reid’s Masterpiece. It’s slightly slower than the A side but if anything has an even heavier groove. Put it this way – if Deep Purple had done soul with a girl singer it might have sounded like this. Either way – both tracks’ll have you exclaiming, “Oh my god that’s the funky grit!” Look out for the LP soon…
(Out 19 September on Freestyle Records)

(PRESS RELEASE)
Australian kings of dirty, gritty, low down funk and soul Deep Street Soul are back with a vengeance! This slamming 45 builds upon the diamond hard funk & soul template they established with their self titled 2009 debut long player on Freestyle Records.

DSS’s new vocalist May Johnston makes her presence felt on this teaser 45 for the new title track taken from the new album Look Out, Watch Out, her voice combining the best elements of Marva Whitney and Spanky Wilson on this dance floor destroyer!

On the flip side, London born ex pat Shirley Davis stamps her own identity on the band’s version of Masterpiece which is totally exclusive to this 45 and not available anywhere else.

Tough yet soulful, hard yet deeply melodic, Deep Street Soul return – doing what they do better than anyone else!