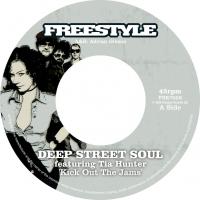 Dirtier and grittier than sex in a gravel pit, this inspired cover of The MC5’s seminal garage rock anthem has to be contender for best new soul/funk 45 of the year. The lead single from Melbourne funk band Deep Street Soul’s self-titled LP due November (yes, another world class funk band from the city that’s already given us The Bamboos and Cookin On Three Burners), it comes with sassy sister-funk vocals from New York‘s Tia Hunter and pays homage to Wayne Kramer and co. by lacing the funk guitar with the subtlest of garage-rock inflections. Then, before your bad self is even close to recovering from that one, there’s another dope sister-funk cut on the B-side – the Shirley Davis featuring, Hammond-toting, hip-shaking Greenbacks. All of which shenanigans should convince you beyond doubt that they most definitely done kicked ‘em out. Check the full album review HERE
Released 12 October on Freestyle

Posted on 24th September 2009 no comments