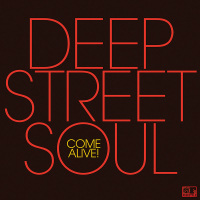 Melbourne-based Deep Street Soul‘s brand of garage-rock tinged funky soul has been a firm MB favourite since the band’s classic cover of the MC5’s Kick Out The Jams rocked up in the monkey’s inbox all the way back in 2009. In the intervening years they’ve put out two LPs, acquired themselves a full-time soul queen singer in the form of Mighty May Johson and been championed by Craig Charles. Now it’s time for that all-important ‘difficult’ third LP and as is often the case with such an occasion on MB – it’s time for a track-by-track scrutiny. Can Come Alive! live up to the promise of scorching first single Souls Come Alive? Let’s find out:

1. OUT OF THE GATES
If you’d ever wondered if Deep Street Soul can play instro funky soul really, really fast, the answer’s an emphatic, yes.

2. DONE ME WRONG
Dirty barnyard funk and May Johson’s first outing on the record. She’s not happy with her man. Well – this is funky soul.

4. SOULS COME ALIVE
The debut single. Massive horns and garage-y guitar riffage – now May’s on about surviving the bad times. I’d remind you that this is funky soul but that should be fairly clear by now.

5. MESSIN WITH ME
Absolute monster groove. This better be a 45 single. Organs firing on all cylinders and Johnson rustles up some suitably fiery vocals.

6. THE HARDEST PART IS KNOWING feat. JOSHUA TAVARES
The torch song. Smouldering organ atmospherics and Joshua Tavares steps aboard to provide the vocal emoting. My missus loved this one. Job done…

7. LOVE ON TAP feat. KYLIE AULDIST
…mind you – no-one wants too many slowies, right? Best get Aussie soul queen Kylie Auldist in quick to ensure the return of the funky goodness. Nice to see her finally in a collab. with this band…

8. LITTLE RAY
…although that might piss Johnson off so might be best to keep her sweet by letting her do the next track – in this case a heavy drumfunk n horns number.

9. BIG C
I suspect this isn’t named after cancer given its frisky nature and joyous horns and organs.

10. DEUX FRERES
Christ is it over already?! The best instro on the LP – all searing Meters antics – as interpreted by a 60s garage band who’ve got the funk. Were such an entity to exist. Which it didn’t back then.

COMMENTS: There seems to a be a slightly greater organ input on this one and on the evidence it’s a great move – props to Monique Boggia then – for the organist is she. Plum full of stank instros, and supersoul vocal cuts this is the band’s most rounded LP to date and features the best songwriting too. Not so much Come Alive! as ‘third rail’ live!