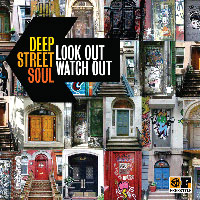 Look Out, Watch Out is the second LP from Oz band Deep Street Soul and – well – it’s pretty much the main shit when it comes to twenty-first century funk with the dirty soul of sixties grooves. It’s all about the grit see? And just as with the raw original rnb and northern soul of The Excitements LP in the spring and the chunky grooves of T Bird & The Breaks’ second album in the summer, you won’t find any smug jazzbo posturing here.

The new album is thirteen tracks deep and once more heavily influenced by the southern funk/ soul sound – particularly that of The Meters – which characterised their self-titled debut. That’s not so unusual in contemporary funk bands though. What sets Deep Street apart is their trademark lo-fi, sleaze-fuzz production which is once again very much on display and possibly even heavier – check the vibe on instrumentals like Soul Loco Suite, Heavy Right Hand, Not Enough Dough or the sweet ‘Liver Splash’ groove written in, about and named after monkeyboxing’s home city – Bristol.

Look Out… also plays to another strength and success of its predecessor – the vocal cuts. The result is that Deep Street invite along two guest vocalists again – this time Roxie Ray and Randa Khamis, but in addition add one to their own ranks in the form of soul singer May Johnston. And that means over half the LP is vocal tracks. Khamis gets to do Viola Wills’ funk classic Sweetback, Ray appears on Fallin’ (actually, this one’s a bit soul jazz – but the break, courtesy of drummer Ago – is dope) and Johnston covers the rest. Johnston herself sounds not dissimilar to Khamis – they both use a vibrato style (which isn’t my favourite) but cuts like the funky soul groove of Hold On Me show what she’s capable of as does the more Betty Davis-like What She Said where her voice is showcased best.

Put simply, if you were looking for a fat slice of funk to round off your year nicely, you’ve just found it and if you weren’t…er…why weren’t you?
(Out 24 October on Freestyle Records)

Deep Street Soul’s new album builds upon the diamond hard and gritty funk & soul template they established with their self titled 2009 debut long player. Not content to return with simply more of the same, “Look Out, Watch Out” expands the group’s sound and repertoire, featuring as it does, incredible new vocalist May Johnston, guest contributions from renowned Randa Khamis and Roxie Ray, a choice cover version plus original tracks augmented with some raucous and heavy brass!

Deep Street Soul kick off proceedings with the romping “Soul Loco Suite”, a heavy instrumental groove that is right in the pocket, which combines Monique Boggia’s teeth rattling Hammond sound, stir in punchy ensemble horns and the groups trademark, wonderfully tough sounding production technique and you have a intoxicating soul stew!

DSS’s new vocalist May Johnston makes her presence felt on the album’s title track “Look Out, Watch Out”, her voice combining the best elements of Marva Whitney and Spanky Wilson on this dance floor destroyer!

Randa Khamis (of Randa & The Soul Kingdom) joins forces with the band to deliver a really great version of the hardy funk perennial “Sweetback” in a storming fashion, just listen to the chugging drums and southern style horns as they peel back your ears and swish your brains about. Truly terrific!

May Johnston gives her best performance on “What She Said,” a low down, nasty and grinding tune with filthy clavinet key lines that bumps along in a raunchy Betty Davis manner, a track that gets down all the way down there…and then some.

At the other end of the spectrum, Roxie Ray’s contribution to the soft, mellow and dreamy number “Fallin’” bookends this collection of what is without doubt the group’s best work to date. Tough yet soulful, hard yet deeply melodic, what Deep Street Soul do better than anyone else!