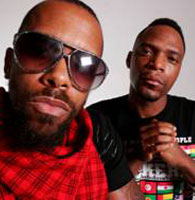 Hey – what’s bigger than Dead Prez’s track Hip-hop? As far as Dead Prez are concerned, not much, since they’re still largely known for their one big hit from eleven years ago. And being mildly racist to white people. Could it be because rappers M-1 and Stic.man sound like a motorway and a book by the creator of the Gruffalo respectively? Perhaps their anti-record label stance held them back? Never mind. Now that the music industry’s having to climb it’s own greasy pole of illegal online downloads whilst receiving an energetic buggering from programs that convert Youtube videos into low quality mp3s for the kids, maybe they can make some headway. But why tour now? Surely there can’t be an album in the offing? Oh – wait – yep – here we go – it’s called Information Age. How appropriate. It seems it will definitely not be released by Jay-Z’s Roc Nation label, however. Still fighting the power then. Full details below vid…

Continuing on the path of politically minded artists like Public Enemy, 2pac and KRS-One, the Florida-formed-New York based outfit known as Dead Prez has been crafting revolutionary but gangsta hip-hop since the late 1990s. Taking inspiration from the life and social activism of Malcolm X, Sticman and M-1, the duo who comprise Dead Prez, have released two proper albums, two underground mix-tapes and two solo albums of street level political hip-hop that is heavily aligned with challenging the status quo, prompting London’s Daily Telegraph to say, “Dead Prez uses music not to lie about having expensive cars or girlfriends with big bottoms, but to rail against the inequities in American society. They do so with an insight and honesty that is rare in any art-form, let alone hip-hop.”