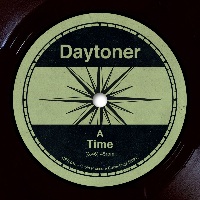 Cornish outfit Daytoner return at the end of the month with a new 45 single Time b/w Keep It Moving. As you might be able to intuit from the track titles, the pandemic’s deleterious effect on live music has had a galvanising effect on the band who were keen to – er – keep things moving, having developed a finer appreciation of, well, time during successive lockdowns. Indeed, the cancellation of six live shows due to lockdown prompted the band’s various members to write six tracks which were recorded to video and became the basis of the forthcoming second Daytoner LP, Remote Connections. The A-side, Time, is a clavinet-n-sax-powered, squelchy funk ride atop which singer Lucy Richards delivers lyrics on a carpe diem theme. No less funky, Keep It Moving on the flip is a looser, slower affair, draped in strings and more sax but with a similar message from Richards.  And who is the monkey to argue with such a message?
(Out 28 January on Cabin Pressure Recordings)

Posted on 7th January 2022 no comments