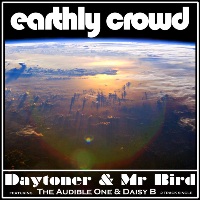 Time to grab yourself a mat and a beanie because Daytoner and Mr Bird have finally teamed-up for summer b-boy jam, Earthly Crowd and roped in The Audible One and Daisy B as well! Undeterred by the mere 800 miles that have physically separated them over a ten year interweb friendship, Bird and ‘Toner finally made good on a long-gestating notion of doing a track together and this floor-filling sureshot is the consequence. Once the decision to work together had been taken, an exchange of breakbeats, bass, guitar, percussion, string and synth stems from each producer’s respective studio sessions followed along with calls to Audible One and Daisy B to knock out some vocals. The end result marries seventies chase theme vibes with a 90s breakbeat production aesthetic and frankly, what earthly crowd wouldn’t want to dance to that? Daytoner’s even bunged in a purely instrumental version. Looks like it’s digital only for now but in Daytoner’s case at least, what was once digital-only frequently later appears on wax, so you never know.
(Out now Cabin Pressure Recordings)