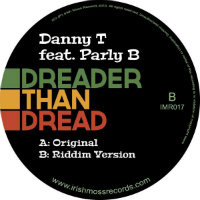 Not to be confused with Honey Boy Martin’s rocksteady track of the same name, nor even with L’Entourloop’s track (also of the same name) this is Danny T‘s Dreader Than Dread with Parly B on the mic. There’s not much that has said ‘a night at Cosie’s in Bristol’ more than this in 2013 so there’s some irony to be found in the fact that Danny T is from Leeds and Parly B from Doncaster. A veritable slab of digital dancehall which manages to keep it minimal but turn on an uplifting skank of around 88 bpm, this is coming out exclusively on wax so I have every expectation of hearing it played by crusty grey-haired old dreads at next year’s St Paul’s carnival alongside their extensive and invariably VG- collection of hissy old dub 45s.
(Vinyl out 5 November on Irish Moss Records – digital from 23 June 2014)