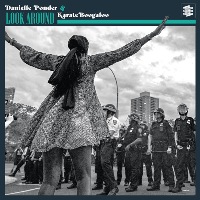 Looks like today’s become a day of zeitgeist-capturing singles on MB with news of this one from Melbourne instrumental outfit Karate Boogaloo who have teamed-up with NYC singer/ activist Danielle Ponder for Look Around. Building from haunting organ swells and guitar picking, into soaring cinematic soul, the collab. began life with singer and band writing the track in a Melbourne studio while Ponder was in Oz. It was initially intended as a commentary on the (bush)firestorm then engulfing Australia, but when news of George Floyd’s murder half a planet away lit anew the fire of global racial politics the project took on a metaphorical dimension. The proceeds of all July and August sales will be donated to both the Equal Justice Initiative in the U.S. and Warriors Of The Aboriginal Resistance in Australia.
(Out now on Hope Street Recordings)