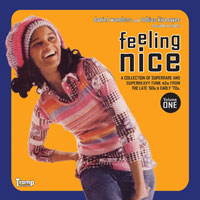 There’s a rich irony to be enjoyed in the fact that the word ‘rare’ is one of the commonest words in the titles or subtitles of funk compilations. However, since Daniel Wanders and Tobias Kirmayer have come up with 12 hot dancefloor cuts for Feeling Nice that haven’t already been compiled to within an inch of their lives (far from it, in fact) you can take these two very much at their word when they say ‘rare.’ This means that the stuff on this release is very rare indeed. How rare? Well, not as rare as – say – an investment banker with integrity (let’s at least try and be plausible) but they would probably pip rocking horse shit to the post. And since Wanders and Kirmayer combed their own collections for these cuts, one can only speculate at the monumental amount of time and money they must have spent digging dusty crates and haunting interweb soul and funk forums over the last couple of decades. Take cuts like the crusty old Clarence Curvan number that this LP has been named after for example. There’s gritty southern funk style vocal cuts like forthcoming single Funky Pete by Guitar Ray, wah-wah and heavy breaks chunks of instrumental funk like The Herculoids Get Back or Sonrize’s mighty Wine For The Party and a soul-jazzy organ-based groover in the shape of James Polk’s Black Door Jeannie – bangers every one.

Somehow the word ‘rare’ just doesn’t seem enough with stuff like that and, actually, as it goes, these two diggers haven’t used it. No, this cover (as well as what looks like a sixties knitwear model) features the adjective ‘superrare.’ Dig it! Cop the vinyl when it comes out – this ain’t going to hang around. Full press guff below. Sorry, no audio for you lot yet.
(Out 13 June on Tramp Records)

Press release
The term “rare” indicates hard to find, precious, and uncommon. No matter what the item, by using that term a company wants to express that the buyer of their product purchases something real special. When it comes to original 45RPM singles in the Funk & Soul universe, the term rare means a lot more than you might expect. Quite often the quality of the music is an afterthought. It has to be rare, otherwise it is bad or even completely out of interest. Of course, this goes for the hardcore diggers only. The few worldwide labels which are legally licensing compilations of rare material have focused first on the quality of the music. Tramp Records is counted among those few (rare!) labels.

The tunes on this compilation are top-end rarities, even for the advanced record collector. Daniel and Tobias started work on this project in the beginning of 2010. Compared to the obscurities to be found here this is not a long time though. The effort, time and enthusiasm they put into it has not been documented. If it had, it probably would have amounted to a thankless task. Why? The answer is simple; CD and Vinyl sales are far away from what they used to be and people who pay for MP3s are the minority. There is no reason to do such a project for the money nowadays. Obviously, Daniel and Tobias are not only collectors and DJs but totally into sharing with the world their passion. Each of them chose six songs from their collection to present for the first time to a worldwide audience. The buyer can be assured not only of the rarity and quality, but of the refined taste and heartfelt care that went into this product.