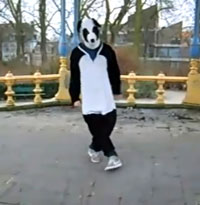 This was actually in the inbox last week but got overlooked. You wouldn’t think it possible to overlook a video featuring an uprocking panda but that’s because you don’t live at Monkeyboxing Towers. I won’t go into exactly how weird living here must be for an uprocking panda to go unnoticed because the king of the potato people just told me everyone would think I was the weird one. I don’t know if Dancefloor Outlaws are weird or not either but they’ve certainly rustled up some nu-funk/ ghettofunk craziness in the form of Disco Cakes: Vol. 1 on the spanking new Disco Cakes imprint. Anyway – listen below and also watch pandas doing pretty much anything except eating bamboo and refusing to mate on the video – though it has to be said – I’m not sure they’re all real pandas…Disco Cakes Vol 1 press guff below everything else…gotta dash – everything just went spiky .

(PRESS RELEASE)The Dancefloor Outlaws are DJs and producers Will Streetwise and Robin Parris, heading at you straight out of the UK’s South West with a unique “ghetto funk” party style aimed straight at the dancefloor. They’re the perfect outfit to head up Disco Cakes, a fresh new imprint from the people who brought you Hot Cakes, Jungle Cakes and more, pushing those block rocking, house party-pleasing funky sounds at a groovier tempo. On this, their first EP for the label, the Outlaws deliver a quartet of tracks custom designed to get any crowd moving, four genuine sure-shot selections for your bag.

First up, Disco Message borrows from Grandmaster Flash’s The Message but throws those famous vocals over a funked out four to the floor beat, supremely groovy bass and cool guitar licks for a no-nonsense slide into nu-disco territory. Magic Badness splices the classic rap from Indeep’s Last Night a DJ Saved My Life with the guitar riff and vocals from Steppenwolf’s 1968 psychedelic slammer Magic Carpet Ride, while Panda Style follows a kitsch, big beat-style vibe with shades of Propellerheads. The EP is rounded off with a collaboration track as Defkline and Red Polo get in on the action, dropping a UK funky style beat for a powerful reworking of Pharoah Monche’s Simon Says, on the cheekily-titled Simon Steals.

These tracks have been rocking the worlds of DJs as diverse as Krafty Kuts, Fort Knox Five and The Cuban Bros, so you know you’re in for a treat. Samplers loaded and turntables primed, the Dancefloor Outlaws are out to break a lot of hearts and wobble a lot of bassbins. Watch this space.

Posted on 22nd November 2010 no comments