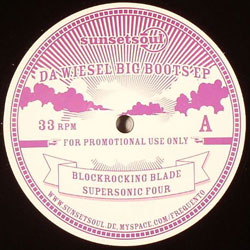 Yes – you will need to get your wallet out again as Da Wiesel follows up his corking Shotgun EP with the Big Boots EP – four slices of steroidal breaks, laced with choice vocal raps. The Funky Hun’s opening gambit is the pneumatic Blockrocking Blade which finds a Chemical Brothers b-line topped by the vocals of long-serving UK MC Blade and a smorgasbord of disco-stylings. Next up is Supersonic Four – a classy old Supersonics rocksteady instrumental garnished with guttural raps from original German old-schoolers Die Fantastischen Vier. It’s a combo that’ll have German-speaking dancefloors everywhere getting all stank though how it translates elsewhere in a vocally English-centric industry remains to be seen. If you need a reason to part with cash money however, you need go no further than the massive I Gonna Give It To Ya. Basically when you hear what is essentially a rhyme from rapper Sensational (a.k.a. Torture) pasted over a chopped up loop from Jean Knight’s Mr Big Stuff (with added cuts from Charles Wright’s Express Yourself) you’ll recognise it for the dancefloor diamond that it is – even as you marvel, ‘Why has no-one done this already?’
(Out now on Frequento Sunsetsoul)

Posted on 30th November 2009 no comments