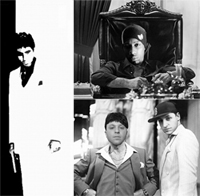 “Don’t call me Scarface!” “Er – why not?” “Because my name is Czarface.” Well, that clears that up then. It doesn’t? Alright then – this is the Inspectah Deck (of Wu-Tang fame)/ 7L & Esoteric (of 7L & Esoteric fame) album project hook-up that was first announced ten months ago, although no release date existed then. Now, one does – but you’ll still have to wait until 19 February to get your hands on it. Hip-hop is, of course, defined by interminable waits for albums – especially if they’re collaboration projects but by Dre/ Detox or Deltron Event II standards – a year is a pathetically short wait. Interestingly, the PR (perhaps unwisely) allows Deck to explain the origin of the project title, “We called it CZARFACE because a czar is someone who is pretty much idolized by certain people no matter what he does or what he’s done. At the same time, he’s looked at like some type of martyr.” Some of you with a basic grasp of Russian history may, however, feel that a Czar is more likely to be lined up with his family, executed by firing squad and remembered as an out-of-touch incompetent who was distantly related to Queen Victoria.

Posted on 20th December 2012 no comments