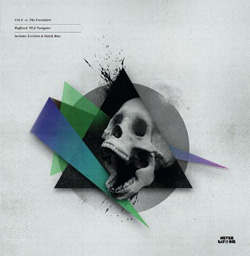 Ctrl Z? Ctrl Alt Delete more like. The Freestylers’ so-so mid-nineties ragga-hop single gets a vicious breaks makeover that’s loud, lairy and reeks of chemicals. Talking of which, I was at a party the other night having a discussion with a mate of a mate while the DJ spun a mixture of hip-hop, funk and reggae. “Play something harder!” he shouts. “You’ll need to take drugs to enjoy that,” I said. “All music’s drug music!” he replies. “Yeah,” I said, “but you don’t need to take drugs to enjoy this.” I saw him later at four in the morning when the DJ had switched to banging ‘choons’. He comes over to me, eyes all pupils and grinning from ear to ear. “You’re right mate!” he shouts, “I’ve taken loads of drugs and I fucking LOVE it!” It’s a sentiment that might apply to this. And probably will.
(Out now on Never Say Die)